Mobile Menu
HomeBlogTake Me Out to the Ball Game

Take Me Out to the Ball Game

Since the 19th century, Americans have been playing ball. Now, it’s as American as apple pie and bald eagles. From the catch phrases we use every day — hitting a home run, striking out, playing hardball, going to bat for someone, throwing a curve ball — to the staple baseball field you’re sure to see driving through any small town, baseball is a cultural phenomenon that’s left its mark on our country’s history. And the Willmar Lakes Area is no exception. 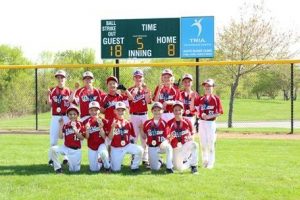 Willmar kiddos with the win! Here are some 1st place medals for one of Willmar’s proud baseball teams.

Right off the bat, Willmar Parks and Recreation offers a t-ball league, kinderball scrimmages, softball and baseball introductory classes, skills and drills camps, and even a baseball league for grades 7-9! Kids will learn how to swing a bat, catch a fly ball, and work together with teammates toward a common goal. It’s a great way for them to spend some time outdoors this summer and make new friends.

And after the kids are too old to play in rec leagues, you can watch local varsity teams face off against other high school teams. The area creates a competitive environment to play in, bringing high-schoolers from St. Cloud, Alexandria, Brainerd, Litchfield, and Paynesville to the local towns. The Willmar boys’ baseball team drew the No. 4 seed in playoffs this year, advancing to the Section 6AAA championships for the second year in a row. Fans from all over traveled with the team, watching them hit home runs across the state. But the ball game isn’t limited to watching area kids batter up! Adults can get in on the fun by signing up for a men’s softball league, co-rec softball league, church softball league, or women’s 5 on 5 softball league. You can dust off the old mitt and gather a few of your friends or colleagues to spend a night under the lights of the baseball diamond. Just make sure to stretch before you step out of the dugout. 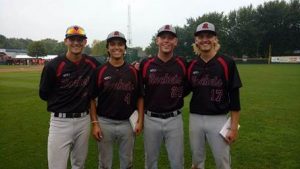 Four of the Raymond Rockets pose for a picture after yet another day at the ballpark.

The Minnesota Baseball Association is also alive and well in the Willmar Lakes Area, with the Corn Belt and County Line leagues battling to prove their baseball superiority. The New London-Spicer Twins play right off Highway 23, kicking up dust at the Green Lake Ball Diamonds, while the Willmar Rails step up to the plate at the Bill Taunton Stadium. Pitching against other area teams like the Raymond Rockets, the Bird Island Bullfrogs, and the Norway Lake-Sunburg Lakers, the Rails and the Twins keep baseball alive throughout the summer, giving you plenty of opportunities to pull out a bag of peanuts and Cracker Jacks for a baseball game.

But in 2010, the area’s love for baseball got to a whole new level: the Northwoods League. The Willmar Stingers were born, bringing talented collegiate baseball players to the area. Out at Baker Field, the Stingers offer entertainment for the whole family. Between innings, they host competitions between fans and mascots, awarding gift cards and food to the winners. Local businesses deliver the first ball to the mound, participating in the fun. 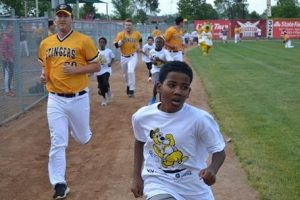 The Willmar Stingers run the bases with area kids, letting them have the full Stinger experience.

And the Stingers take time during week days to visit area kids, spreading their love for baseball, teamwork, and the community to the younger generation. But after they’ve played a few rounds of kickball or visited the library, the Stingers get right down to business, making the community proud as they face off against other Northwoods teams. The games are fun for the whole family, and affordable too! The Willmar Lakes Area has endless opportunities to get out to the ball game and be a part of the crowd. The only issue is deciding where to start.

Kandiyohi County Parks – Campgrounds to Fit Every Style and Need

By Laura Anfinson If you are looking for a camping […]

I sit at home on a windy Sunday afternoon, thinking […]

We are excited to announce our 30-day Willmar Lakes Area […]

During these uncertain times, we want to continue to promote […]