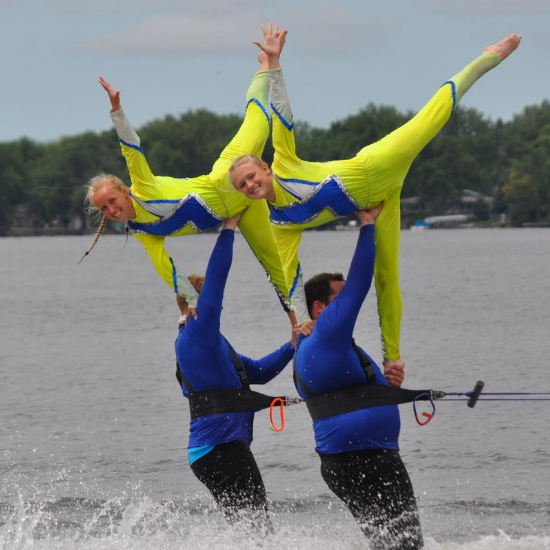 Dating back even before the stated birth year of the Little Crow Ski Team, 1979, there are legends swirling around the shops and taverns of tiny New London, Minnesota of skiers that organized and performed as a “club”. There are stories of tricks, acts, comedy, characters, families, show themes and more from over the years. There are stories of hardship and loss, as well as success and achievement. These things have been the “glue” that has held the team together for more than 40 years. 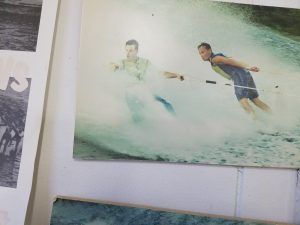 Taking a look back at the history of the Little Crow Ski Team.

You just have to walk into the team’s clubhouse and look at all the photos and props that adorn the walls and storage spaces, look into the history that has been accumulated, to know what an awesome opportunity and responsibility it is to just be a part of this amazing team.

For fans, it’s a trip to Neer Park in New London to watch the team deliver what is known as “Show Skiing”.

Trophies line an undersized trophy room as fans amble past these monuments of achievement to find their seats in the bleachers. Trophies that represent thousands and thousands of hours of hard work and commitment by skier and non-skier teammates alike. All motivated by the laughter and applause by those adoring fans.

The experience on those Friday nights, all summer long, is an opportunity not to be taken lightly. As you cross the park a few hours before show time, coming into view is a beautiful and picturesque river, lined with towering trees and sandy shores. There are the dozens of water skiers, young and not-so-young, rookies and veterans of the team, diligently assembling every piece of what will become a “show”. They toss a tease or handshake at each other, then get to work hauling skis and ropes to the starting docks. 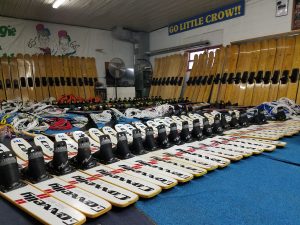 It takes a variety of different kinds of skis to accomplish the many tricks and acts of the Little Crow Ski Show.

Thousands of skiers have put on the hallowed “team shirt” of bright yellow over the life of this team. They are certainly proud of what they have done, knowing that the hardest part of all would be not participating.

Originally the team just put together shows for fans, the intent of which was to raise some money, do something with the skills they had developed, and start to make a name for themselves. But over time, the team became more and more connected with the sport, at a state and national level, of “Show Skiing”. Two National Championship victories in the 1990’s cemented the team as a true contender. Since those days, and every year after, the team fights hard to return to the national stage.

On that curvy little piece of the Crow River, in that spot known as Neer Park, fans see talent in water skiing you can’t easily find anywhere else in the world. The awesome view of a 4-Tier pyramid coming straight at the bleachers is something to behold. That’s right, and only a moment before a string of skiers had disappeared into a bay and out of sight, only to come into view again fully built into, not one, but three pyramids made up of nearly 40 people. That’s a feat in itself. But safely landing all of those skiers only a few feet from the fans is an even bigger challenge. Once achieved, fans are all on their feet and cheering like mad. 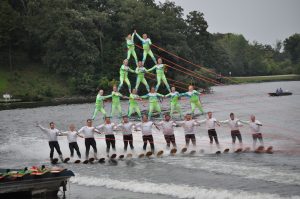 The amazing 4-tier pyramid is just one of the many talented acts that you’ll see on Fridays at Neer Park in New London.

Its not just pyramids that fans come to see. At 45 miles per hour another boat comes screaming into the show course and past the bleachers with a dozen team members with no skis on their feet. These are the “bare footers” that just kicked off their skis in favor of skimming across the water with nothing under them but their own bare feet. Little Crow has originated some of the most inventive bare footing acts, including backwards bare-footing, and the crowd-pleasing Bare Foot Pyramids which stack layers of pyramid climbing performers onto shoulders, and then the skiers on the bottom step out of their skis.

Little Crow boasts of the finest ski jumping team in the region, and routinely pulls 5 ski jumpers at a time over the jump (which is center stage for their fans) landing helicopter spins, flips, and a variety of other challenging feats.

Round it all off with a variety of other ski acts, as well as comedy, and you have a fun and entertaining show.

The Little Crow Ski Team performs Friday nights, all summer long, at Neer Park in New London. Tickets are available at the shows, or reserved tickets can be purchased at our web site, www.littlecrow.com. Complete show schedules are available on the web site as well. You can also follow us on our Facebook Page. Anyone interested in volunteering or participating in the shows, support staff, etc., can also contact the team through the website.