Sibley State Park in the Fall 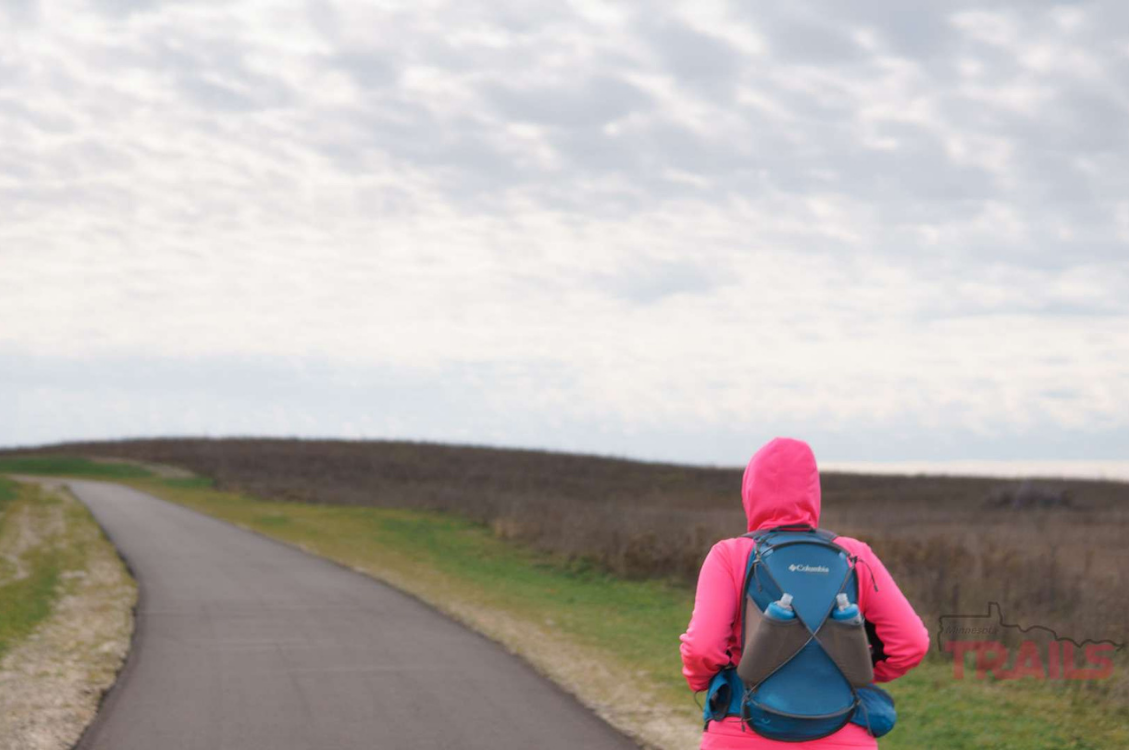 Sibley State Park‘s 2,500 acres put it solidly in the top one-third of Minnesota’s state parks as far as size goes, but it claims a seat in top ten with 200,000 annual visitors. It can be a busy place, but things calm down when the leaves are off the trees. A mild weekend in November was the perfect time for a visit.

Jen and I arrived about mid-day on a Friday with great plans of hiking and exploring a new section of the paved Glacial Lakes Trail inside the park. It was a great plan, but after setting up camp we decided to enjoy the mild weather and wonderful sunshine, sit in our camp chairs and watch a few more travel trailers pull into Oakridge Campground until it was time for a bonfire and a quiet night.

There were no excuses on Saturday morning as Jen’s parents Theresa and Mike arrived early to join us for a day of hiking. The plan was to take a look at the new amphitheater in the park, search for the place where the new bike trail passes under Highway 71 and then spontaneously pick another route using our Avenza map app. Shortly after getting on the trail there was a split and like so many times in life, we took the wrong turn. This trail wasn’t on any maps, so we were relying on our sense of direction, which turned out to be a hilarious choice. Instead of veering southeast we went northwest and walked through the Lakeview Campground, ending up at the boat landing on Andrew Lake. From there, an old section of paved trail took us out to a road near the canoe portage between Andrew and Henschien Lake. For all the times I had visited Sibley State Park, this rough, paved trail had somehow remained hidden to me. 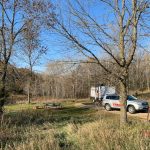 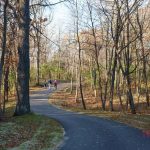 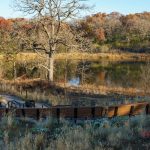 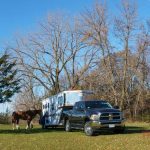 We pieced together a return route on natural surfaces through the horse camp and the Hiking Club Trail past Mount Tom into the campground. Walking along the park road toward the horse camp I noticed a short post with a sign just a few steps into a field and nearly swallowed by shrubs. This place, I learned, is the former site of the 1890 homestead of Norwegian and Swedish Immigrants Peter and Anna Henschien. Besides a very short family history and a photo of the house taken in 1999, there wasn’t much more information.

We continued to the scenic overlook near the horse camp and took a break. Temperatures had crept up to 60 degrees and the jackets were coming off. From the top of our little hill we had a great view of the rest of the park’s other rolling hills. Besides a few dots of burnt orange and rusty browns the forest’s fall colors were gone and our path to Mount Tom was a green ribbon mowed into the tan grass that was swallowed by the woods in the distance. On top the next rise, the roof of the Mount Tom observation tower stuck out over the treetops and we began working our way toward it.

This leg of our hike was a trail for both people on foot and on horses and it was pretty much a wide, mowed path through the woods. After a short jog down a gravel road, we reached the Hiking Club Trail. Near Mount Tom it’s a steep and rocky climb that packs a punch. Unfortunately, all the water bars and geo-grid fortifications are no match for the feet of 200,000 people year after year and in these steep sections the trail looked like it needed some TLC. 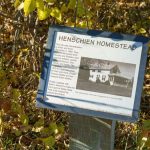 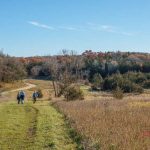 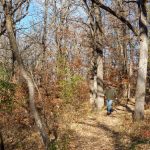 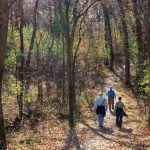 At the Little Mount Tom overlook, the little brother of the more popular Mount Tom overlook, we stretched the legs and took a selfie, then set out for the real deal.
At the parking lot I turned toward the observation tower to read the interpretive sign at the bottom. I was just about to start hiking up that last hill when I turned around and noticed the crew was gone. The sound of footsteps through leaves came from the woods and a voice announced: “We’re not going that way.” It was mutiny. Outvoted three to one I had no choice but to comply. Right after Mount Tom the Hiking Club Trail runs on a very distinct, flat ridge before it tucks back into the woods. This last leg back toward the campground was again very hilly, but not impossible to hike. By this time of the day the temperatures were nearing the mid sixties and it felt more like late April than early November. We even met a fellow hiker who had taken off his shirt to cool down. By contrast, there were six to nine inches of snow on the ground at the same time last year, dumped by a record-setting storm two weeks prior. Back at camp we had dinner and enjoyed the rest of the sunny day.

The next day we had to right a wrong and go in the correct direction to find out exactly where that brand new paved bike trail goes. It was so brand new that the construction marker stakes were still in the ground and only sparse grass was poking out from the netting put down to stabilize the soil. We walked southeast from the interpretive center toward the park road, though woods, then prairie and back into the woods. A natural ridge looked like it had been put there just to provide a flat surface for the trail to cross through a wetland, and it was lined with mature oaks that had been there many years. Eventually, we crossed the park road and ended up in the open prairie. The trees disappeared, the view opened up and we could see two other hikers off in the distance and over the next hill. We eventually caught up with the two women hikers and struck up a chat. They were locals who were excited to have a new trail in their backyard. Since the construction crews moved out, they said, this new section of the Glacial Lakes State Trail has seen a lot of use. 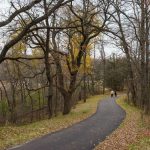 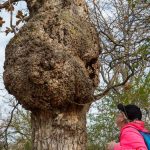 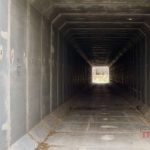 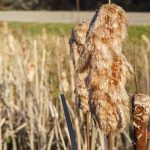 At the intersection of Highway 71 and County Road 40, the trail reached the boundary of the park. A tunnel took us under the road and that was as far at it’s been built. From here, it’s just about three and a quarter miles into New London and the connection to the Glacial Lakes State Trail, but we don’t know when that link will be made.

To understand why this short piece inside the park is a big deal, a look back in time reveals that this is one tiny step in the fulfillment of the original plan for the Glacial Lakes State Trail. It was authorized in 1971 to originate at Kandiyohi County Park on the north end of Green Lake, travel to Sibley State Park, on to Glacial Lakes State Park and end at Lake Carlos State Park. The master plan was amended in 1993 to make the trail originate in Willmar and head northeast to Richmond through New London and Paynesville, with a possible connection to Saint Cloud thrown in. The extension north to Glacial Lakes and Lake Carlos State Parks was left in. A master plan for the extension into Sibley State Park was done in 2012 and here we are, fifty years later, inching closer to the intended goal.

To see the original MN Trails article with photos and videos, Click Here.

Photos are owned by MN Trails