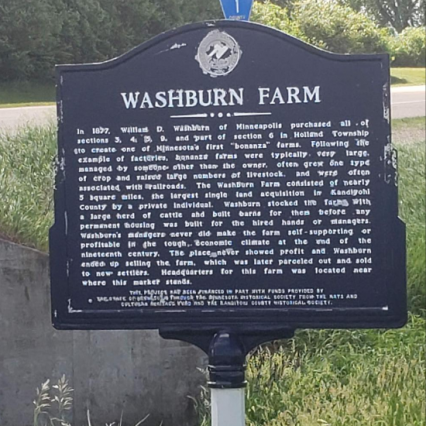 One of the first “bonanza” farms in Minnesota came into being in Holland Township in 1877, when W.D. Washburn of Minneapolis, purchased all of sections 3, 4, 5, 9 and part of section 6. This put nearly five square miles of land into just one farm.

This was the largest single land acquisition in Kandiyohi County by any private individual. Several land promotion companies made larger acquisitions, with the largest one of these also in Holland Township, when one firm owned all of the township, with the exception of Washburn’s farm and one more half-section.

Ground was broken in 1877, when an entire half-section was put to the plow. This was also the first improvement made of any kind within the township. Washburn was an absentee owner, leaving the place under the supervision of a series of managers, none of whom could make the place self-supporting, much less show a profit. Washburn stocked the place with a large herd of cattle and built barns for them, although several years were to pass before any permanent housing would be built for managers and hands.

The place never did show a profit, so Washburn sold it to a Mr. Hill who had, at one time, been one of his managers on the place. Hill in turn failed to make it pay, so he sold it to another owner, Frank Little, who also could not make it go financially. He finally settled by parceling out the land and selling it to new settlers.

Where: This marker is located 2 miles north of Prinsburg on County Road 10 near intersection with County Road 80.