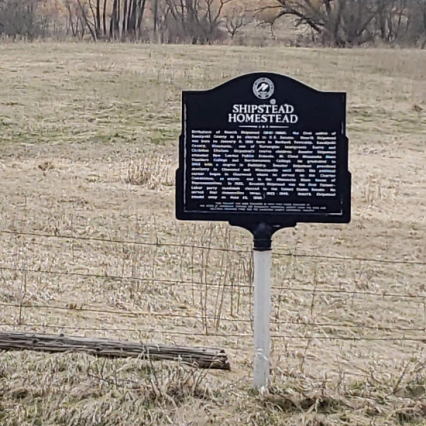 Birthplace of Henrik Shipstead (1881-1960), the first native of Kandiyohi County to be elected to U.S. Senate. Senator Shipstead was born January 8, 1881 in Burbank township. He was one of 12 children of Saave and Christine Ellefson Shipstead. Shipstead was educated in New London and the Minnesota Teachers College in St. Cloud. In 1903, he graduated from Northwestern University Dental School with honors. Up until 1920, he had his dental practice in Glenwood. In 1906, Shipstead married Lula Anderson and had one son, Weston.

His political career began in Glenwood where he served on the charter commission and as mayor. He also served on the State House of Representatives. He made two unsuccessful bids for U.S. House of Representatives in 1918 and for Governor in 1920. Shipstead was the Farmer-Labor party’s first candidate for Senate which he won in 1922. He was re-elected in 1928, 1934, and 1940. Shipstead was considered a lone wolf due to his “radical” ideas. He won the respect and friendship of his fellow politicians due to his hard work and careful study of the issues. His final run for office was in 1946 where he was defeated and said: “I am through with politics.” Henrik Shipstead passed away on June 25, 1966 after battling Parkinson’s disease.