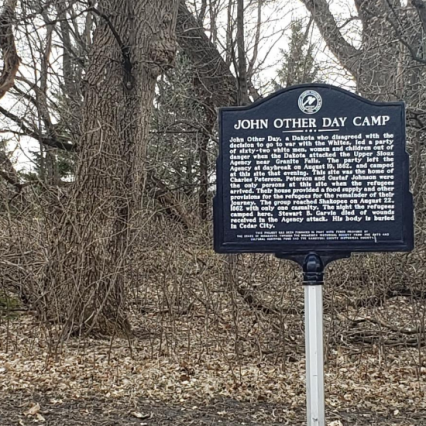 John Other Day, a Dakota who disagreed with the decision to go to war with the Whites, led a party of sixty-two white men, women and children out of danger when the Dakota attacked the Upper Sioux Agency near Granite Falls. The party left the Agency at daybreak on August 19, 1862, and camped at this site that evening. This site was the home of Charles Peterson. Peterson and Gustaf Johnson were the only persons at this site when the refugees arrived. Their house provided a food supply and other provisions for the refugees for the remainder of their journey. The group reached Shakopee on August 22, 1862 with only one casualty. The night the refugees camped here, Stewart B. Garvie died of wounds received in the Agency attack. His body is buried in Cedar City.