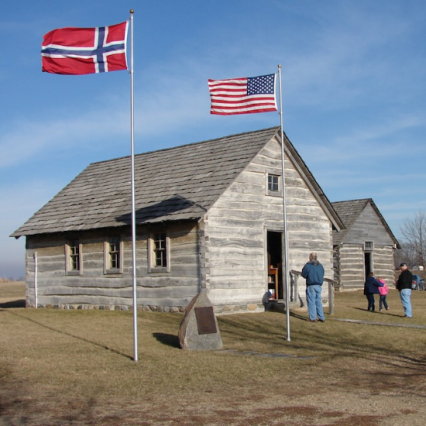 The Old Log Church is a replica of the log church built in 1868 by Norwegian settlers. From this church, six area churches grew. In addition, there is an original log granary that now serves as an Interpretive Center and a restored log cabin originally constructed in 1861. All are open to the public and host tours by request. There are also regularly scheduled events such as Vesper Services each Saturday night throughout the summer and an anniversary celebration the third Sunday in August. For information contact NLLHA, 6338 County Rd 40 NW, New London, MN 56273

The first white settlers in the Norway Lake area, Evan and Anders Railson, were attracted to this region of forests and lakes that was similar to their homeland of Norway. In 1858 they built log houses on their claims near the lake they later named “Norway Lake”. In 1859 other settlers came to the Norway Lake area including Ole Knutson who built a log house on his farm and later gave a corner of his land for the site of the Old Log Church.

The Norwegian Lutheran Synod was formed by immigrants wishing to retain close ties to the Lutheran Church of Norway. The Norway Lake settlers became a part of this Synod. There was concern back in Norway that the settlers in America would lose their Lutheran faith and so pastors were urged to reach out to serve the new settlements. One Lutheran pastor who ministered to the Lutherans in the Norway Lake area was Pastor Johnson from the Swedish Church. On August 26, 1861, he baptized the first white child born at Norway Lake, a daughter of Mr. and Mrs. Ole Knutson named Nilja.

In June of 1867 Pastor Thomas Johnson baptized 55 children in three days while visiting Norway Lake congregation. It was clear that a church building was needed and on June 1, 1868, it was decided to build a log church. Each family was asked to contribute a log and the building was completed the same year. Lars Markhus was called to serve as pastor and was installed on October 17, 1869. In addition to serving the Norway Lake congregation, Pastor Markhus conducted services at other places in the area as well as making missionary trips to Norwegian settlements in western Minnesota. The log church served the Norway Lake community as a place of worship and as a school for about ten years. During that time 490 baptisms, 142 confirmations, 72 marriages, 77 burials, and 125 services were conducted. The large influx of settlers made the log church inadequate. Therefore the congregation was divided into East and West Norway Lake each with their own church building. Later four more congregations were formed: First, West Lake, Monson Lake, and South Lake Johanna, each with their own church building. In March of 1887 it was decided “That the Old Log Church should be moved to the parsonage farm and set up there for use as a hay barn or stable.” This left an open spot on the prairie were the Old Log Church stood.

In 1974 under the leadership of Marvin Hauge, volunteers from the Norway Lake Parish restored the abandoned cemetery and erected a stone monument as a memorial that reminded the community that here was a site of historical and religious meaning. In the fall of 1996 a meeting of individuals interested in recognizing and preserving the rich heritage of the Norway Lake area decided to begin by building a replica of the Old Log Church on a site adjacent to the cemetery. A Board of Directors was elected and on January 14, 1997, a Certificate of Incorporation was issued to the Norway Lake Lutheran Historical Association. Ed and Rebecca Huseby donated an acre of land for the building site adjoining the cemetery. Contributions of support in terms of money, building materials, furnishings and volunteer work were solicited and the response was overwhelming. Harvesting of oak and ash trees began in the fall of 1997. Building construction started in the spring of 1998 and was completed in the summer of 1999.