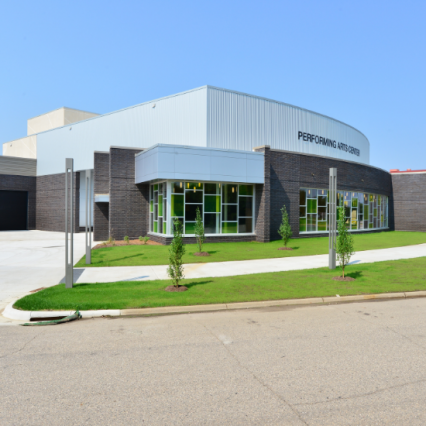 It was designed to accommodate large group learning and conferences as well. It includes a large projection screen and video projector for large group presentations. It also is easily accessible by all of our students, parents and grandparents because each of the areas including the stage, orchestra pit, control both, and upper seating areas are accessible by either an elevator or a ramp.

Featuring:
• Large stage with adequate wing space to accommodate large performances
• Stage craft area adjacent to the stage to construct sets
• Dressing rooms with changing areas that have showers
• Green room with audio and video connections to the performance stage
• Orchestra pit and a control booth with audio mixing capabilities.
• Orchestra shell
• State of the art theater rigging system to give our students experience working on complex performances
• Many technology features including wireless microphones and state of the art theater lighting systems with catwalk access

The theater lobby contains a large amount of glass that will give the lobby an open and airy feel. The theater lobby connects to a large new student commons area between the existing school and the new theater. This area will give students a place to assemble before school to keep them out of the elements. It will also serve as a new collaborative learning space during the day and connect with the theater to create a large learning center.