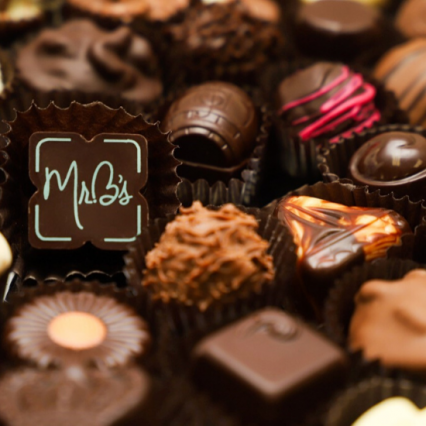 Born and raised in rural Minnesota, the late Dwight Barnes was the original Mr. B. Dwight was a photographer by trade and opened his first photography studio in 1953.  It was during his 55 years as a professional photographer that Dwight’s love for chocolate launched him into a second career as a Chocolatier.

As the founder and leader of the World Console of Professional Photographers, Dwight often traveled to Europe throughout his career where he frequented many of Europe’s best bakeries and chocolate shops. It was during these travels that he began taking an interest in discovering a way to bring these gourmet European chocolates to the U.S. Finally, on a trip to Antwerp, Belgium, he happened on “the best chocolatier in the world,” Mr. Hans Burie.  Dwight decided it was time he became a Chocolatier himself and convinced Mr. Burie to mentor him.  Dwight spent three months in Belgium side by side with Mr. Burie who taught him how to make his finest chocolate from scratch.

Upon Dwight’s return to the U.S., he began making Belgian chocolates for family and friends. The word quickly spread and soon Dwight was making chocolates for local and statewide special events and businesses. Once people tasted Dwight’s chocolates, they were hooked and asked for more.  This led Dwight to officially go into the chocolate business and he opened Mr. B’s in Willmar, Minnesota in 1987.

Mr. B’s has won several awards throughout the years including the “Taste Of Chocolate” in Bloomington and “Best Chocolate” by the Star & Tribune. Although very proud of these awards, Dwight considered his customers’ satisfaction as the highest honor and award.

In 2009, Mr. B’s eldest daughter, Kathy, and her husband, Steve, took over the chocolate business while two of his other daughters remained actively involved – Sue ran the kitchen and Mary, the retail store.  Even then, Dwight was never far from the chocolate shop and worked up until a year before he died at the age of 86.  At that time the decision was made to allow a new owner to continue the Mr. B legacy.  Brian Bollig purchased the business in 2017 and has made the commitment to continue to share Dwight’s passion for bringing fine chocolates to the world.

Brian’s chocolate story actually begins in 2017 where Dwight’s story left off.  Similar to Dwight, Brian has enjoyed a career completely outside of the chocolate business…

Brian has been working as a Civil Engineer since 1995, opening his own engineering and consulting business in Willmar in 2007. Growing up, Brian was always thinking and had a love of creating wherever he went, especially in the outdoors. It didn’t matter where he was; he was always trying to solve problems and figure out how things worked.  Rainy day dams in the driveway and snow forts in the winter are just a few of his favorite adolescent masterpieces.

True to his childhood calling to “build things” and his love of the outdoors, Brian received a bachelor’s degree in Civil Engineering and a Master’s in Environmental Engineering.  He married his wife Kathy in 1993 and the two of them along with one son and three daughters call Willmar, Minnesota home today where he also continues to operate his engineering services business.

Ironically enough, before Brian met Kathy he was not particularly fond of chocolate except the occasional Snickers bar.  Brian smiles when he shares that Kathy must have rubbed off on him and helped him give chocolate another look, but only if it was GOOD chocolate like Mr. B’s.

Brian and Kathy’s youngest daughter, Gabbie’s favorite store has always been Mr. B’s.  When the opportunity surfaced to purchase the Mr. B’s store, Brian’s creative mind kicked into high gear. Not only would it be an opportunity for him to appeal to his family’s fondness for good chocolate, but it was also a chance to continue the Mr. B’s chocolate legacy while at the same time giving Brian more things to “create”….. only this time with chocolate. Hats off to the Original Mr. B!  We hope you enjoy some of his original chocolate classics and also take the opportunity to try some new Mr. B’s creations.