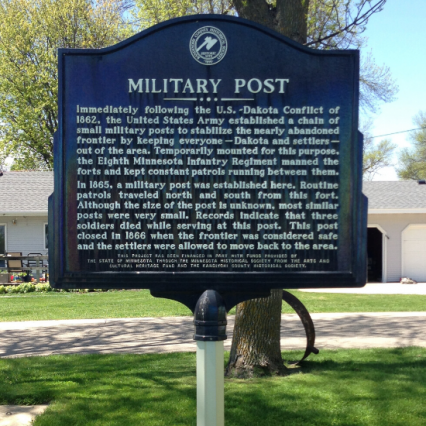 Immediately following the U.S.-Dakota Conflict of 1862, the United States Army established a chain of small military posts to stabilize the nearly abandoned frontier by keeping everyone – Dakota and settlers – out of the area. Temporarily mounted for this purpose, the Eighth Minnesota Infantry Regiment manned the forts and kept constant patrols running between them.

In 1865, a military post was established here. Routine patrols traveled north and south from this fort. Although the size of the post is unknown, most similar posts were very small. Records indicate that three soldiers died while serving at this post. This post closed in 1866 when the frontier was considered safe and the settlers were allowed to move back to the area.

Where: The marker is located in Big Kandiyohi Lake County Park West (Formerly known as Kandiyohi County Park No. 1) 3.5 miles north of MN 7 on County Road 44.