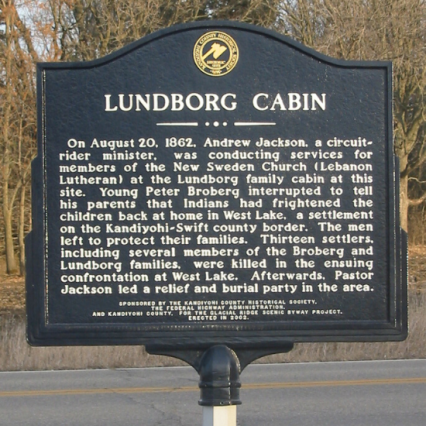 Andreas Lundborg and family settled in section 6 of Arctander township on July 15, 1861. This family was part of the West Lake Settlement in Kandiyohi County. On August 20, 1862, the Lundborg family along with two Broberg families were victims of the U.S.-Dakota War of 1862. This became known as the West Lake Massacre, the following is the recounting of that day by Anna Stina Broberg Peterson, the only survivor of the Anders P. Broberg family. This story was dictated when she was eighty-one years old. She was born at Skofde, Vastergotland, Sweden, on July 29,1846, and died at St. Hilaire, Minn., Sept.12,1933.

Where: This marker is located on the farm two miles south of Sunburg on County Road 7. There is a Minnesota State historical marker in honor of the West Lake Massacre in Lebanon Cemetery in New London.