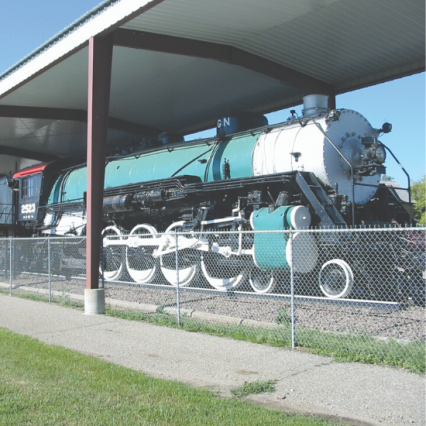 The Great Northern passenger train, No. 2523, was built in 1923 to speed up the passenger main line service through the mountains. This train was painted green because all passenger trains were, although this train was occasionally used to carry freight. The train was usually driven at 79 mph because 80 was the maximum speed without cab control. Three men operated inside the train, a brakeman, a fireman, and an engineer. There were also two men on the caboose.

A powerful and speedy locomotive of the P-2 class, the engine now looks every bit the aristocrat that it was during the years it was preeminently associated with Great Northern’s crack transcontinental trains – The Empire Builder and the Oriental Limited. The Empire Builder was inaugurated in June of 1929 and the popularity of the train led to addition of cars and this necessitated more powerful engines – renowned S-2 locomotive.
Engine 2523 is the last of 28 locomotives built for the Great Northern by the Baldwin Locomotive Works. After these engines were replaced by the more powerful S-2’s in Empire Builder service they pulled the fast mail trains and the famed silk trains. The P-2 engines later were used in freight service and were retired in 1955.

Engine 2523’s last run was in 1958, and was placed on permanent display at the Kandiyohi County Historical Society on October 17th, 1965.

The Great Northern Railway Engine #2523 has its own Facebook Page!!
Engine’s Page: https://www.facebook.com/greatnorthernrailwayengine2523/