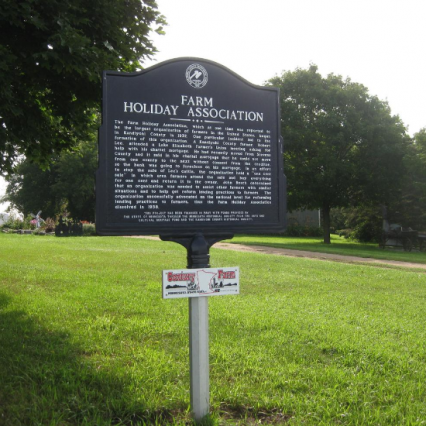 Compiled from accounts by John Bosch, former State and National President of the Association, and Clint Haroldson, who was active in the organization of the movement.

“The Farm Holiday Association, which at one time was reported to be the largest organization of farmers in the United States, was born in Kandiyohi County and ended its existence at a meeting, held six years later, at Willmar Memorial Auditorium.

John Bosch tells of the incident which led to the organization of the Farm Holiday Association: Robert E. Lee, who had recently moved to Lake Elizabeth Township, appeared before the Farmers Union local asking for the help of its members. He had a chattel mortgage on a herd of Hereford cattle. The mortgage was not delinquent, but the terms forbade the removal of the mortgaged property from Stevens County, his former home. The bank was going to foreclose on his herd the next day. Efforts to dissuade the banker were unavailing, but when he and the sheriff arrived at the Lee farm nearly all the farmers in the area were there. They planned to have a “one cent sale”.

Clint Haraldson describes that technique: “The ‘one cent sale’ was a tactic that friendly neighbors would employ to foreclosure sales, gathering in mass around the auctioneer so no outside bidders could be heard. Each item would be bought for one cent by one of the neighbors and given back to the former owner.” The sheriff and banker decided not to risk the sale and went to Willmar, where a local bank bought the mortgage. Shortly after that incident a real estate mortgage foreclosure was stopped at the courthouse in Willmar.

These two incidents led Bosch to develop an idea around which he felt it would be possible to arouse the farmers and “get them to take action relative to a totally impossible situation.” The program consisted of four major points: “1) the farmers demanded a mortgage moratorium at once, 2) a price level for farm products equal to the cost of production, 3) abolish the Federal Reserve system, and 4) in the event of war all corporation profits involved in the manufacture of war materials were to be taxed 100%.” All farmers would be asked not to sell any farm products and not to pay any mortgage debts until these demands were met.

A county organization was formed August 8, 1932 at which Reuben Felt was elected chairman, Albert Van Buren, vice-chairman and Franklin Clough, secretary-treasurer. “From that day on,” Haraldson says, “John Bosch gave full time to promoting and organizing the Farmers Holiday.” His assistants from this country were Hemming Nelson, Harold Peterson, Clint Haraldson, Fritz Kragenbring, and Richard, Herbert, and Earl Bosch, along with many others. All worked without compensation. A state organization was formed October 5, 1932.

In addition to stopping mortgage foreclosures, “the prospect of withholding farm commodities from the market was another major aspect of the Farm Holiday movement,” according to Haraldson. A mass meeting, held in Willmar in 1932, laid plans for withholding, and a roadblock was set up on U.S. 12 about a mile west of Atwater. Farmers kelp a “round-a-clock” vigil, asking truckers to return their loads to the shippers in support of the withholding action.