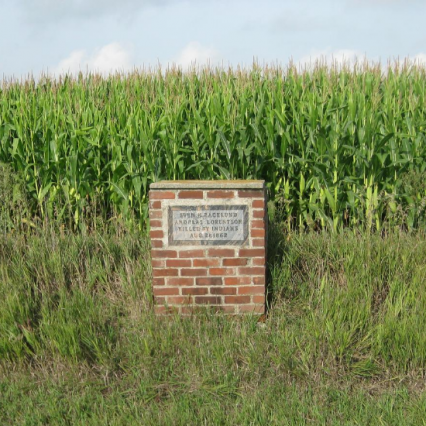 Andreas Lorentson and Sven Backlund were traveling toward Hutchinson with a train of Columbia area refugees. This was the same party which had fought a running battle with the Dakota at Diamond Lake, then camped overnight at Wheeler Lake.

The refugees had gone only a few miles, next morning, when the Indians attacked again. Teamsters whipped the wagons into a circle and the war party, meeting unexpected resistance, fell back. In doing so, they met Lorentson and Backlund, who were herding the refugee’s cattle behind the wagon train. Lorentson and Backlund were both killed. Seeing that, Silas Foot and William Kouts came out of the wagon barricade to keep the refugees safe. Foot and Kouts shot at the Dakota and did wound or kill one of them which caused the whole band to disappeared from the area. The wagon train was able to proceed to Forest City.

Where: This marker is located 1 mile east of Atwater on US 12 then .7 miles north on Kandi-Meeker Road NE.