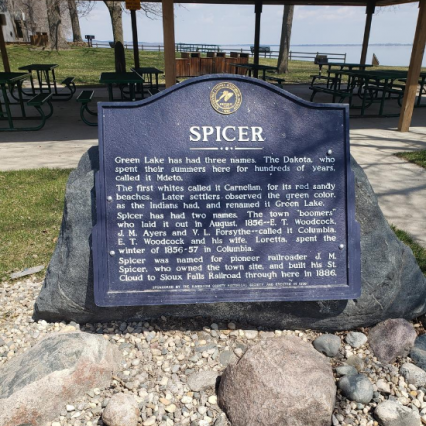 This town site was staked out August 10, 1856, by J.M. Ayers, V.L. Forsythe and E.T. Woodcock on sections 3 and 4 in Green Lake township and sections 33 and 34 in New London township. This area covered 320 acres including one mile of lake front. Forsythe took a claim adjoining the town site and Woodcock took a claim adjoining the town site on the opposite side. So the promoters controlled 640 acres. After being surveyed in December 1856, Columbia was incorporated by the Minnesota Territorial Council in 1857.

The first home was built in Columbia in October 1856 by the town site company. This was the 14’ x 15’ log cabin which Mr. and Mrs. Woodcock occupied during the winter of 1856-57. The second building was built by Woodcock and the third by Arnold. Mr. Arnold conducted a small store out of his building. The post office was established in 1857. The mail came semi-weekly on an established route. After a time Columbia was dropped from the route and the mail went through Irving town site. Surveys made in 1858 placed a proposed rail line six miles to the south of Columbia, blasting the grandiose dreams of the promoters. In 1861, while trying to organize Monongalia County, Columbia became the county seat. Then the U.S.-Dakota War of 1862 brought chaos and upheaval to the county which did not help Columbia and it hopes of becoming a business center. After the Conflict in 1862, many settlers left the county. When people started to come back to Kandiyohi County, no attempt was made to re-establish Columbia.

Where: This marker stands in the Spicer Village Park at intersection of Lake Avenue and Manitoba Street.