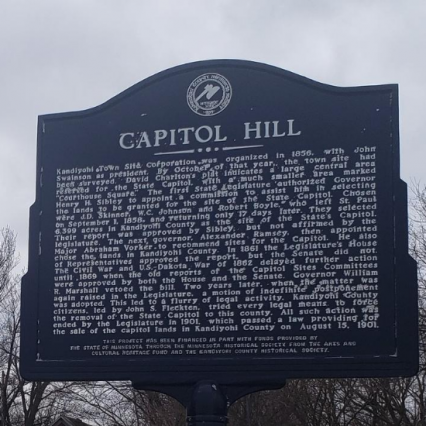 The 1849 Act of Congress that established the Territory of Minnesota specified that “a temporary seat of government should be at the city of St. Paul and later, by a vote of the people, a permanent seat should be chosen and buildings erected thereon.”

When the State of Minnesota was admitted to the Union in 1858, the legislature authorized the governor to appoint a commission to assist him in selecting lands for capitol building purposes. Governor Henry H. Sibley appointed a three-man commission to search for and select the ideal site. These men were furnished with ox teams and camp equipment, and were to receive three dollars per day while engaged at the work. The commission did not spend much time searching for suitable capital lands, for their finished report was dated only twenty-five days after their appointment as commissioners, with the chosen Capital Hill site at Kandiyohi town site on the shores of Lakes Minnetaga and Kasota.

In 1861, Representative Kennedy introduced a bill to remove the capital from St. Paul to Kandiyohi. It was passed by the House (twenty-five to twelve), but defeated in the Senate. Proponents of the change made no further effort until 1869, when the matter was next brought before the legislature and passed both House and Senate.

In spite of the votes in the legislature and all the high-flown oratory, Governor Marshall vetoed the bill on the grounds that there was no public sentiment for it and that it had never been submitted to the public for a vote, as provided in the bill that established the state. There was an override attempt, which did not generate the support needed. Other attempts to remove the capital were launched, including campaigns by Representative Andrew Railson and Senator G.A. Glader from Kandiyohi County, but without success.

Construction began on the present state capitol in St. Paul in 1901, and on August 15th that year, the state auditor held an auction in Willmar, which realized about $125,000 in the sale of the capital lands in Kandiyohi County.

The fifty-year battle was over.