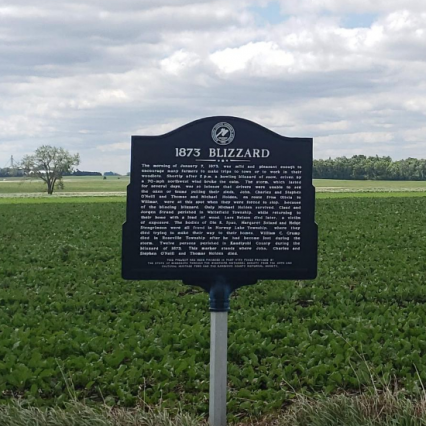 The morning of January 7, 1873, was mild and pleasant enough to encourage many farmers to make trips to town or out to the woods for fuel. Shortly after 2 p.m. the perfect calm was broken by a howling blizzard of snow, driven before a 70-mph northwest wind. The storm, which lasted for several days, was so intense that drivers were unable to see the oxen or teams pulling their sleds.

John, Charles and Stephen O’Neill and Thomas and Michael Holden, en route from Olivia to Willmar, were at this spot when they were forced to stop, because of the blinding blizzard. Only Michael Holden survived.

Claud and Jorgen Strand perished in Whitefield Township, while returning to their home with a load of wood. Lars Nelson died later, a victim of exposure. The bodies of Ole K. Spau, Margaret Soland and Helge Stengrimson were all found in Norway Lake township, where they had died trying to make their way to their homes. William C. Crump died in Roseville Township after he had become lost during the storm. Twelve persons perished in the county.

Where: This marker stands where John, Charles and Stephen O’Neill and Thomas Holden died. It is located 2 miles north of MN 7 on US 71, then .2 miles west on County Road 80.