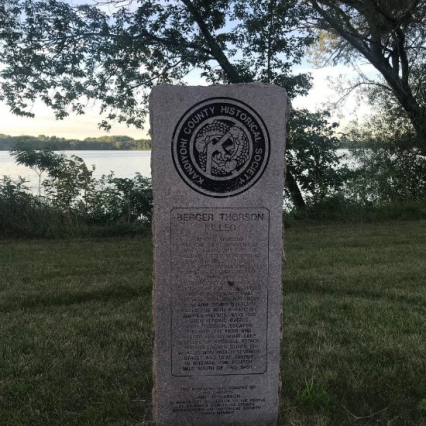 “Here in a rude cabin lived an old bachelor, Berger (Tolerson) Thorson alone. They reached his solitary dwelling at sunset and, not wishing to alarm the other people of the neighborhood by the reports of their fire arms, killed him with a hatchet. He was afterwards found at the entrance of his cabin with his head spilt open.”

On August 26th, the “Irregulars” Company formed by George C. Whitcomb traveled over 40 miles to Foot Lake and buried Berger Tolerson Thorson at the site of his cabin where he had been killed. Colonel H.H. Sibley issued a captain’s commission to Whitcomb and authorized him to enlist and organize men for a company. On August 24th, thirty men were sworn in and the company was formed. Albert Sperry, Andrew Nelson, Nels Tornbom, and Joseph Thomas enlisted from Kandiyohi and Monongalia Counties.

Where: Thorson’s cabin stood on what is now North 7th Street and Olaf Avenue in Willmar. This marker stands one block north of the cabin site.