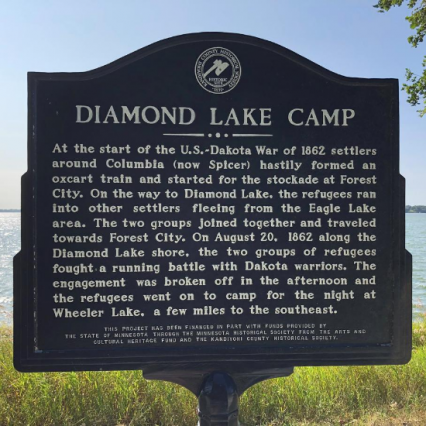 At the start of the U.S.-Dakota War of 1862 settlers around Columbia (now Spicer) hastily formed an oxcart train and started for the stockade at Forest City. On the way to Diamond Lake, the refugees ran into other settlers fleeing from the Eagle Lake area. The two groups joined together and traveled towards Forest City. On August 20, 1862 along the Diamond Lake shore, the two groups of refugees fought a running battle with Dakota warriors. The engagement was broken off in the afternoon and the refugees went on to camp for the night at Wheeler Lake, a few miles to the southeast.