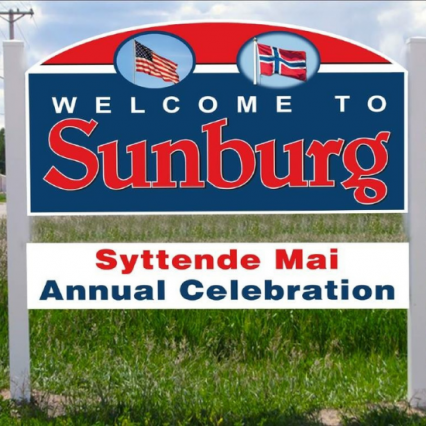 The Village of Sunburg was platted by local residents in 1916. This is rather unique in that most towns were platted by the railroad. Sunburg is located in the northwest corner of Kandiyohi County, within walking distance of Swift and Pope Counties on MN Hwy 9 and Kandiyohi County 7 in the heart of the Glacial Ridge Trail. Sunburg is called home by people from 20 mile radius.

Founded by Norwegian immigrants, Sunburg continues to celebrate and reflect its ethnic heritage. Kultur Hus offers Scandinavian gifts, hosts Norwegian class instruction on Fridays and musical lessons and events throughout the year. Barnenhaug, is a Norwegian preschool, a collaboration between the Concordia Language Village and the KMS school district. Sunburg celebrates Syttende Mai (Norwegian Independence Day) every year on the Sunday closest to May 17 featuring a full day of activities, including a large parade.

Sunburg sponsors the Norway Lake-Sunburg Lakers, a community baseball team in the County Line League. Games are held Sunday afternoons at the Willie Reigstad baseball diamond in Sunburg. The Sunburg area is also home to a variety of churches, seven of which stem from the Norwegian Lutheran tradition. The Trolls Car Club sponsors a large collectible car show every Labor Day weekend.