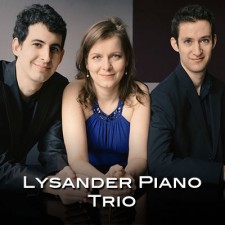 LYSANDER PIANO TRIO–
The Lysander Piano Trio, a winner of the Concert Artists Guild Competition, has been praised by the Strad for its “incredible ensemble, passionate playing, articulate and imaginative ideas and wide palette of colours.” The Trio has developed a reputation for innovative programming of master works from the canon alongside newer works and hidden gems of the repertoire. An ideal example of this is the Trio’s 2014 debut recording, After a Dream (CAG Records), featuring music by Ravel, Haydn, Schubert, Joaquin Turina, and Moshe Zorman, which was acclaimed for its “polished and spirited interpretations” (New York Times).

Internationally, the Trio has performed recently in Israel and at the Copenhagen Summer Festival, and current US career highlights include: the Kennedy Center and Smithsonian American Art Museum in Washington, DC; Krannert Center for the Performing Arts; Purdue University’s Convocations Series, Los Angeles’ Clark Memorial Library at UCLA and the Chamber Music in Historic Sites series of the Da Camera Society of Mount Saint Mary’s University; Chicago’s Dame Myra Hess Concert series and Rockford Coronado Concerts; San Francisco’s Music at Kohl Mansion; Atlanta’s Spivey Hall; and the Detroit Institute of Arts. In addition, the Trio recently made its concerto debut, performing the Beethoven Triple Concerto with the DuPage Symphony Orchestra near Chicago.

The Lysander Piano Trio was formed at The Juilliard School in 2009, and selected that year to represent Juilliard in a special concert in Mexico City on the occasion of President Joseph Polisi’s visit to Mexico. The Trio has performed in master classes for Alfred Brendel and for Ida and Ani Kavafian at the Chamber Music Society of Lincoln Center, and it has studied with Ronald Copes of the Juilliard String Quartet, Joseph Kalichstein of the Kalichstein-Laredo-Robinson Trio, and Seymour Lipkin. The Lysander Trio takes its name from the character in Shakespeare’s A Midsummer Night’s Dream.

The concerts are held at the Willmar Education and Arts Center (concert hall / performance theater / art gallery) in Willmar, Minnesota.

Stay out of the rush line and buy a membership in the lobby, $60 per adult and $10 per student (K-12)
The rush line starts 15 minutes before start time for single ticket sales, $20 each.