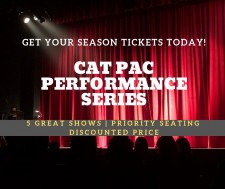 Season Tickets for Only $99/person
Season Ticket Holders Get Priority Seat Selection for the Series!
On Sale Now Until October 22nd.