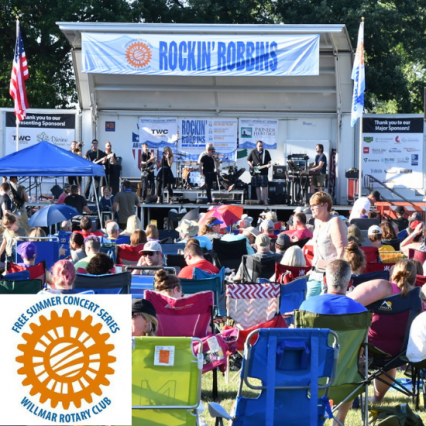 Pack a lawn chair and join us out at Robbins Island in Willmar for this FREE summer concert series. Proceeds go to support the ongoing revitalization of Robbins Island Regional Park.

You’ll find a wide variety of food vendors and food trucks out at Robbins Island, so come early and catch the opening act at 5pm!

Chase & Ovation is the World’s Premier Prince Tribute Show based out of Minneapolis. The only one of its kind, Chase & Ovation has been performing the music of Prince (live in concert) for the past 11 years. This high-energy, spot-on production brings you the very best of Prince throughout his expansive career in a one of a kind arena-caliber concert experience.

Mason Dixon Line is the Midwest’s premier country-rock outfit. Formed in 2018 by brothers Justin & Jason Ploof, along with seasoned musicians Micah Barrett and Tony Mazzone, the band focuses on a live show that brings their audiences the biggest country hits of the 60s, 70s, 80s and 90s by country music Hall-of-Famers and icons. The group has been the supporting act for some of country music’s biggest names, including Tanya Tucker, Sawyer Brown, Craig Morgan and many more!

Wild Angels, “The Women of Rock, Pop & Country,” features three of Minnesota’s most beloved singers – Pamela McNeill (lead vocalist of the Fabulous Armadillos), Mary Jane Alm (Minnesota Music Hall of Fame recipient), and Aimée Lee. Featuring a phenomenal 7-piece band – “The Handsome Devils” – these talented musicians perform hits by some of the greatest “female divas” the music world has ever known, including Adele, Madonna, Janis Joplin, Heart, and many more.

The Fabulous Armadillos have been wowing our Rockin’ Robbins crowds since our very first event in 2016. They absolutely love coming to Willmar to play at Robbins Island, and once again, they’ll round out YEAR 5 with their high-energy show and jaw-dropping talent. You don’t want to miss the Fabulous Armadillos!